The North American Hockey League (NAHL) is pleased to announce that it will be hosting and simulating the 2020 Robertson Cup Playoffs and Championship live on the NAHL TV YouTube channel beginning Wednesday, April 15th.

Using an XBox One and the EA Sports NHL video game, the NAHL staff constructed the rosters of the 16 NAHL teams from scratch that would have qualified for the Robertson Cup Playoffs this season based on winning percentage when the season was canceled. (Note: Team names may not be 100% accurate as it does not allow for certain city names). 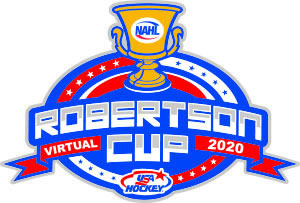 Then on the schedule based below, the games will be played in ‘Simulation Mode’ (meaning the XBox computer simulates and plays the game determining the outcome). All games will be streamed and archived on the NAHL TV YouTube Channel and will be promoted to the NAHL social media network.

Catch the Wilderness Game below: